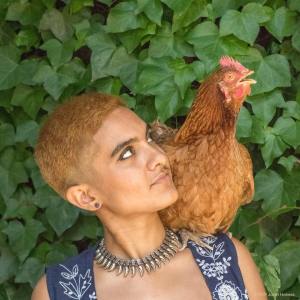 Mahika Gupta (they/them) is a gender-fluid Indian American chef, artist and community organizer. For the past seven years, they have been a part of various human and non-human justice movements. Mahika currently lives in Philadelphia with their companion chicken Corrie, who was liberated from a slaughterhouse in June 2018. Together they attend protests, marches and community gatherings to advocate for both human and non-human liberation. Currently, they are working to bridge the food inequality gap in their neighborhood through a new planted based food business! 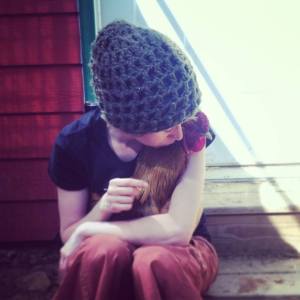 Roz Van Kleeck (they/them), a graduate of Columbia University, is a passionate vegan who has been rescuing and caring for non-human animals since 2009. They and Alastor started Triangle Chicken Advocates in Chapel Hill, North Carolina in 2014, where they are the head caregiver and photographer extraordinaire. 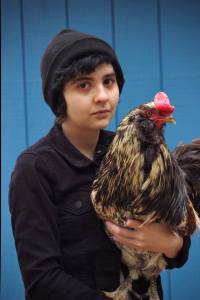 Gavin Wolf (he/him or they/them) is an activist and longtime animal caretaker based in rural New Hampshire. In early 2017, after becoming aware of the increasing issue of rooster homelessness, Gavin founded Sun and Moon Microsanctuary to focus on the rescue, care, and advocacy for farmed birds. They currently share their home with an assortment of survivors from various industries, from small local farms to cockfighting. A strong believer in the value of caretaking and microsanctuaries as activism, Gavin is excited to contribute to the board and see the movement grow. 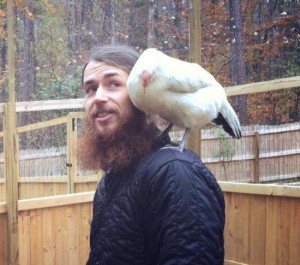 Alastor Van Kleeck (they/them) has a Ph.D. in English and is a freelance writer, educator, and community organizer. Alastor spends most of their time working at the Triangle Chicken Advocates sanctuary, which they and Roz founded in 2014, and which inspired them to start The Microsanctuary Movement together later that year. 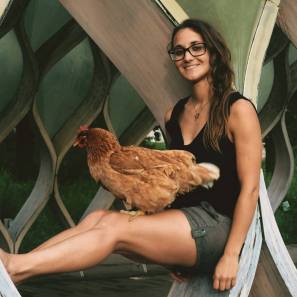 Kelsey Atkinson (she/they) has a Master in Public Administration from DePaul University and conducted original research on the plight of slaughterhouse workers. She is local to Chicago and has spent the past decade in community organizing circles centered on animal rights, racial justice, environmental justice, and mutual aid efforts. She co-founded Chicago Animal Save and helped to organize slaughterhouse vigils, animal rescues, and numerous events to draw connections between the intersections of human and animal liberation struggles. She was the primary caretaker of the late Helen (pictured) and other rescued farmed animals at their microsanctuary. Kelsey enjoys writing poetry, playing guitar, exploring nature, and cooking vegan food.